Do you know what Geisha/Gesha looks like? How about Bourbon? There are many varieties of coffee and it’s not always clear how they differ. Setting aside variations in flavor and profile, there are clear physical differences among the plants.

Some coffee trees are tall and skinny, while others are short and bushy. And coffee cherries can be wildly different in size and color. Read on to learn more about the identifying features of six popular varieties of Arabica.

How to Identify Different Varieties of Coffee

There are hundreds of species of coffee, but about 70% of the world’s coffee production is Arabica. Although Arabica is more vulnerable than Robusta, it has a flavor and aroma that make it more appealing to most consumers. And here are many varieties of Arabica, of which a small number are commonly grown for both the specialty and commodity markets.

Producers choose to grow a variety for a number of reasons, including yield, profile, and local environmental conditions. It’s important to recognize coffee varieties to avoid mixing lots during harvesting and processing. If two or more lots are combined, it could lead to muddled profiles and subpar cupping scores.

To better understand how the most common varieties differ physically, I studied six different types of Arabica. This took place between the end of harvest season and the beginning of flowers starting to blossom – a period of around two months – at farms in Boquete, Panama. The elevation of these farms varies between 1,300 and 1,800 m.a.s.l.

The characteristics included in this article are informed by this analysis of particular plants. My study is a personal observation of a limited number of farms and is not intended as an overall reference.

You may also like Understanding The Myth of Heirloom Variety Coffee 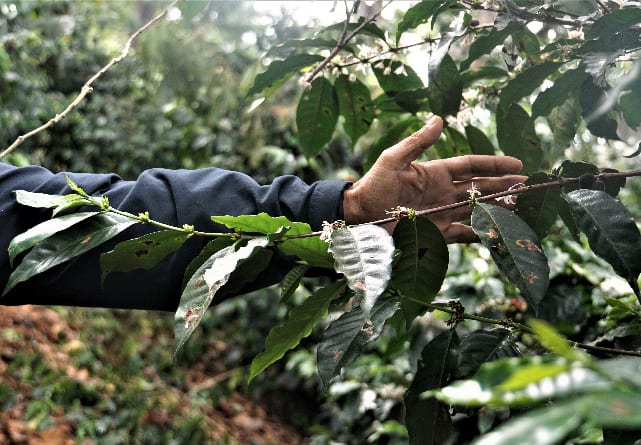 A producer shows the length of a Bourbon branch. Credit: Sawang Tongdee

We use certain physical characteristics (also known as phenotypes) to identify plants. These include:

It’s not always necessary to use all of these characteristics to identify a variety because some varieties have an obvious feature. 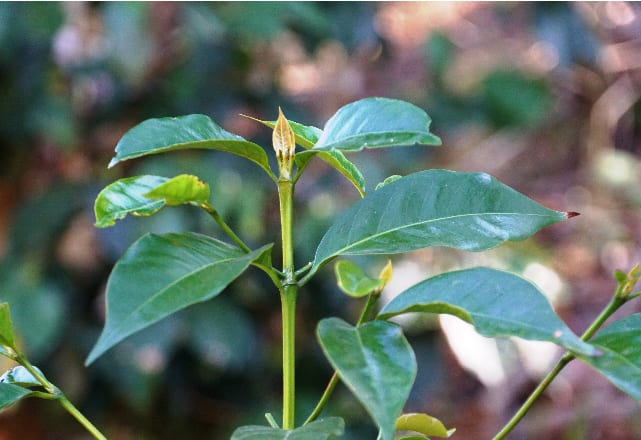 Typica has distinct characteristics and it might be the easiest variety to identify. The plants have a conical shape with a main vertical trunk and can reach up to 5 m. This height means that there are longer distances between the branches and between nodes on the same branch than in other varieties.

The lateral branches form 50 to 80° angles with the vertical stem. Both the trunk and branches are not very thick. Leaves, cherries, and green beans are usually elongated, and the tips of leaves are bronze when young.

The leaves also have a smoother surface and less wavy borders than other varieties of Arabica. Typica cherries ripen to a bright red.

Bourbon has the same tall stature and conical shape as Typica, but is a bit bushier with more secondary branches. I notice that the main trunks are larger and branches seem to be thicker, so the plant is sturdier and less flexible than Typica. The distances between branches and nodes are a bit shorter too. This increased density means that Bourbon produces around 30% more fruit than Typica.

The leaves are broader than Typica, and have a bumpy texture with wavy edges. Young leaves are usually green but can sometimes have bronze tips. Cherries are round and ripen to a range of red, orange, or yellow (but don’t vary on the same plant).

Find out more in Geisha vs Bourbon: A Crash Course in Coffee Varieties

Read Also:  Common Mistakes That Roasters Make & How to Avoid Them 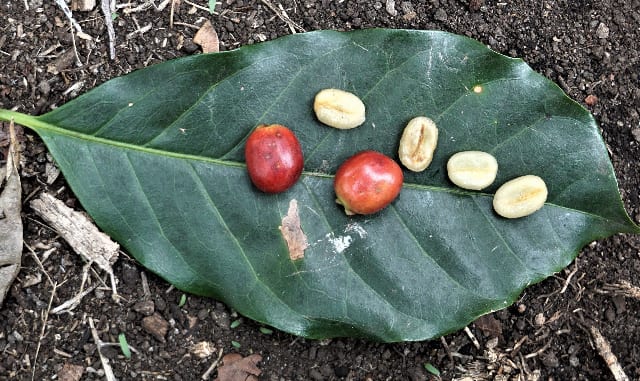 A lot of Arabica varieties are descendants of Bourbon and Typica. Caturra is a natural dwarf mutation of Bourbon and it’s a lot shorter and denser than its relative plan. It has smaller distances between the branches on the trunk and lots of secondary branches, making Caturra a bushier plant than either Typica or Bourbon.

Otherwise, it has similar characteristics as Bourbon. Its large leaves have wavy borders and green tips. The cherries are also round, average sized, and ripen to red or yellow. 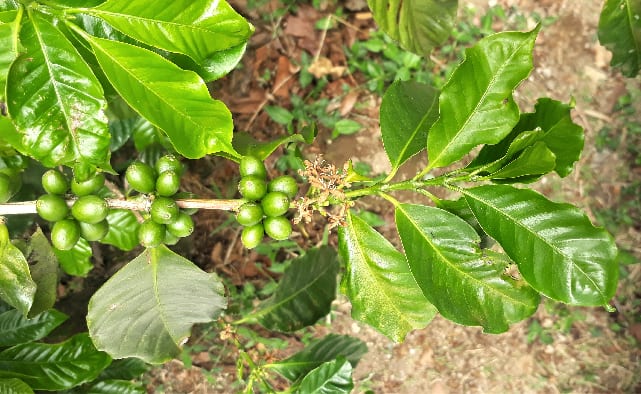 The plant is relatively short and the lateral branches form close angles with the primary branches. It’s rare to see secondary branches at the top of the plant, which makes the plant more of an umbrella shape than Typica and Bourbon, which have a conical shape.

Catuai leaves are wavy and usually have green tips, but I have seen some instances of bronze tips. The fruit doesn’t fall off the branch easily, which makes this a good choice in areas with strong wind or rain. The plant is a high-yield variety, producing round, averagely sized cherries. They usually ripen to red or yellow, though there are rare instances of orange Catuai. 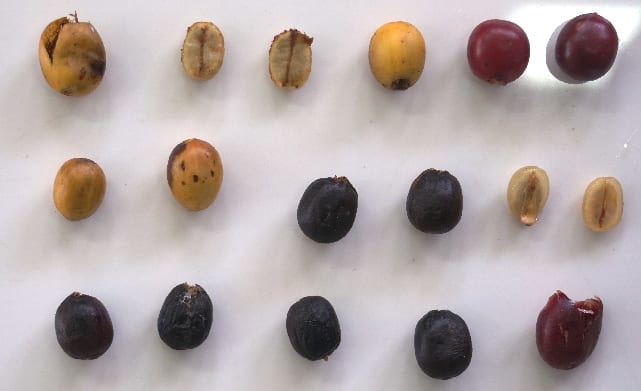 Pacamara is a cross between the Pacas and Maragogipe varieties that was created by the Salvadoran Institute for Coffee Research (ISIC) in 1958. It isn’t considered a stable variety, meaning that plants are not consistent from one generation to the next. However, it is widely grown.

Pacas is another mutation of Bourbon, and Maragogipe is a mutation of Typica. The latter has extremely large cherries, which it passed on to Pacamara. The size of fruit and distinctive pointy tipped leaves make Pacamara easy to identify. These leaves can have either green or bronze tips.

The stature is compact and the shape of the plant is conical. There are short distances between the branches and the nodes in the branches, making this a bushy plant. The trunk and branches are similar to the Bourbon in that they’re thicker and less flexible than most other varieties.

Learn more in What’s So Special About Pacamara?

Read Also:  How to Regulate Your Brewing Recipe For Espresso Roast Amount 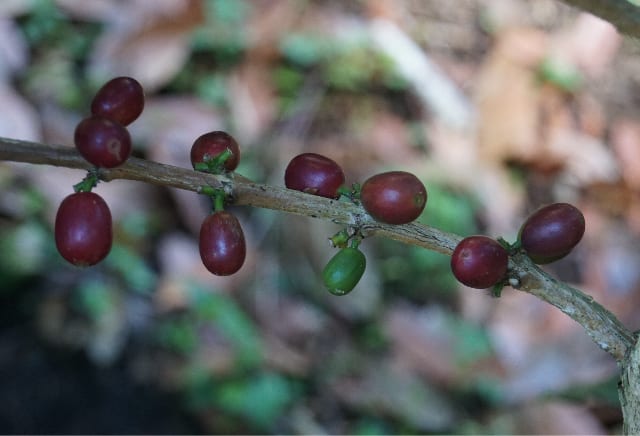 It’s easy to identify this hugely popular variety by the angle of the upper branches and the shape of the plant. The branches toward the top reach out to the sky at a 45 to 50° angle. Geisha/Gesha has a tall stature with long distances between branches and nodes and a thin trunk and branches, somewhat like Typica.

The leaves are smooth and elongated, and the cherries are also elongated in a similar way to Typica fruit. In my experience, the main visible difference between Geisha/Gesha and Typica is that the former has an umbrella shape or flat top, whereas Typica has a conical shape.

Ripe Geisha/Gesha cherries taste totally different from those of other varieties. They have citrus notes, sweetness, and a jasmine-like floral element. 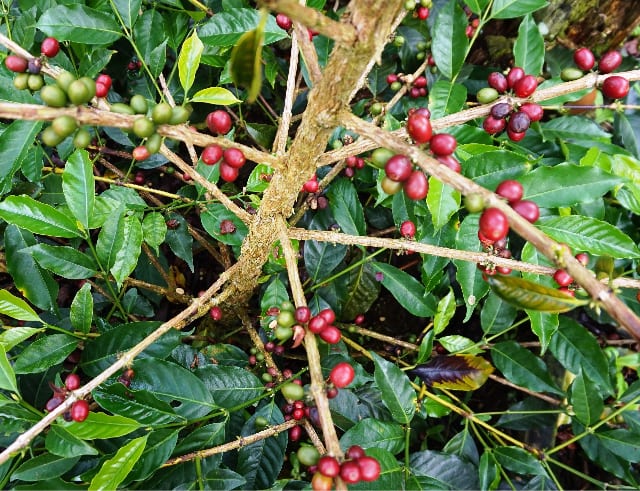 A Geisha/Gesha plant with cherries at various stages of ripeness. Credit: Sawang Tongdee

Different varieties of coffee don’t just vary in flavor and profile – they’re also visually different plants. By studying the shape and stature of the tree, as well as the characteristics of cherries and leaves, you can more easily identify what kind of Arabica is being grown or processed.

Enjoyed this? You may also like Bourbon vs Caturra: What’s a Variety & Why Should I Care?

How to Become More Adventurous With The Coffee You Drink

How to Include Non-Dairy Milks in Your Coffee Shop Menu

How To Build & Maintain a Relationship With Your Coffee Buyer

How to Regulate Your Brewing Recipe For Espresso Roast Amount

Newspaper is your news, entertainment, music & fashion website. We provide you with the latest news and videos straight from the entertainment industry.
Contact us: [email protected]
© Newspaper WordPress Theme